Fishing in the Rocky Mountain National Park offers a chance to see the beautiful landscape while appreciating the wide array of wildlife in the park. Kirk’s Fly Shop has a number of guided trips that will let you experience fly fishing in Rocky Mountain National Park.The park’s lakes and streams are home to several species of trout, many of which we will help you catch. Here are four species of trout we fish for at the RMNP. 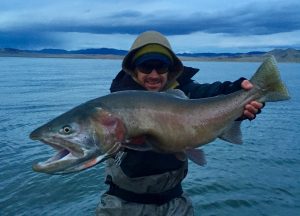 This is one of the most common and easily distinguished trout in the Southwest. Rainbow trout, named after the pink stripe that runs along the side of their bodies, have an average size of 12-16 inches. These fish have the black spots typical of most trout that run the length of their bodies including their tail. They thrive in many of the rivers and lakes in the Rocky Mountain National Park.

Cutthroat trout have two red stripes along their jawline. These fish top out around 12 inches in length in Rocky Mountain National Park, making them one of the smaller trout in the area. The park is home to the Greenback cutthroat trout, characterized by their green bodies. These trout are native to the area and are listed as an endangered species. The park allows for catch and release of Greenback trout in some areas.

Brown trout are brown in color, with spotted patterns that vary from fish to fish. Their tails often lack the dark spots that run along the rest of their bodies. In Colorado, these fish typically grow between 13-17 inches and thrive in lower elevation streams. These fish are more tolerant to warm water than their rainbow and cutthroat cousins.

Brook trout are typically dark green in color and have numerous red-orange spots along their sides. Their fins are rust-colored with white or light colored edges. In Colorado, these trout generally grow to 12 inches in length and thrive in cold water. These fish prefer gravel bottomed streams and brooks.

Contact us today to schedule your next guided Colorado fly fishing trip and see just how great the Rocky Mountain National Park can be.